Amalgam is a combination of metals that has been a popular filling material used by dentists for over 150 years in hundreds of millions of patients around the world. However, today the safety of this dental staple is being re-examined.

Although it is sometimes called silver amalgam or silver fillings, amalgam actually consists of a combination of metals. Approximately half of a dental amalgam filling is liquid mercury and the other half is a powdered alloy of silver, tin, and copper. Mercury is used to bind the alloy particles together into a strong, durable, and solid filling.

Dental amalgam is the least expensive type of filling material and dental amalgam fillings are strong and long-lasting, so they are less likely to break than some other types of fillings. In some countries it is still widely used for particularly large fillings in cases where the amount or shape of remaining tooth structure cannot effectively support a dental cement filling.

However, dental amalgam contains mercury – a known neurotoxin. It releases low levels of mercury in the form of a vapor that can be inhaled and absorbed by the lungs. High levels of mercury vapor exposure are associated with adverse effects in the brain and the kidneys. 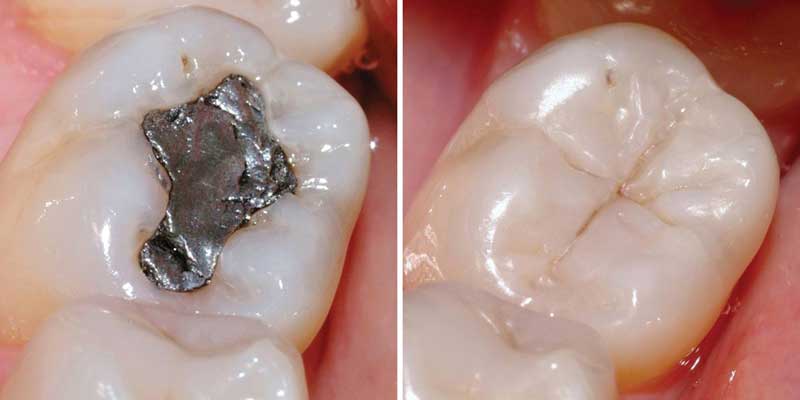 Are Amalgam Fillings Bad for You?

At this point, the American Dental Association (ADA) and Food and Drug Administration (FDA) consider dental amalgam fillings to be generally safe for adults, not pregnant women, and children of ages 6 and older, as existing evidence does not seem to establish direct link between dental amalgam use and adverse health effects in the general population.

While FDA continues to evaluate available information on dental amalgam, a new study by University of Georgia’s Department of Environmental Health Science in the College of Public Health shows that amalgam fillings can significantly contribute to prolonged mercury levels in the body.

Analyzing data from nearly 15,000 individuals, the study was the first to demonstrate a relationship between dental fillings and mercury exposure in a nationally representative population. Previous studies of mercury exposure from dental fillings have been inconsistent and limited and this new research was also the first to control for age, education, ethnicity, race, gender, smoking, and seafood consumption.

The researchers further analyzed exposure by specific types of mercury and found a significant increase in methyl mercury, the most toxic form of mercury. Their research results suggest the human gut microbiota may transform generally harmless elemental mercury into a different form of mercury. While regular mercury is a heavy metal known to be toxic at high levels, causing brain, heart, kidneys, lung, and immune system damage, new research suggests methyl mercury may cause damage even at low levels.

Mercury from dental amalgam and other sources (e.g., fish) is bioaccumulative. Studies of healthy subjects with amalgam fillings have shown that mercury from exposure to mercury vapor bioaccumulates in certain tissues of the body including kidneys and brain. Toxicologists know that mercury is poison, but it all depends on the dose. So the scientists conclude that if you have one dental filling, maybe it’s okay. But if you have more than 8 dental fillings, the potential risk for adverse effect is higher.

People with numerous dental fillings who are also exposed to mercury from other sources such as seafood or work environments are most at risk. People with more than 8 fillings had about 150% more mercury in their blood than those with none. The average American has 3 fillings, while 25% have 11 or more fillings.

Thanks to technological advances, dentists and patients today have choices when it comes to selecting materials to fill cavities. Composite fillings are made of natural tooth-colored plastic and glass mixture. Composites are also used for cosmetic improvements of the smile by changing the color of the teeth or reshaping disfigured teeth. Composite fillings are now used more often than amalgam or gold fillings as people tend to want fillings that blend with the natural color of their teeth.

The same study additionally examined dental composite resins, which can release small amounts of bisphenol A (BPA), which may cause developmental or reproductive damage. The researchers found no association between dental fillings and urinary BPA.

While composits generally cost more than amalgam and may require more prep work in areas of the mouth that are difficult to keep dry, such as molars (back teeth) or cavities below the gum line, our dental office and your favorite LA dentist recommend going metal-free. In our dental office, we do not use or recommend amalgam fillings.

For more information about metal-free composite dental fillings and other dental services, please call us at 213-486-0006 or make your appointment online.